Here’s a chance to order your entry programmes for THE EVENT of the YEAR!!

We have a really good line-up from a wide range of acts by performers ranging from age 6 to 60+.

Why not book your seat for the event now?! 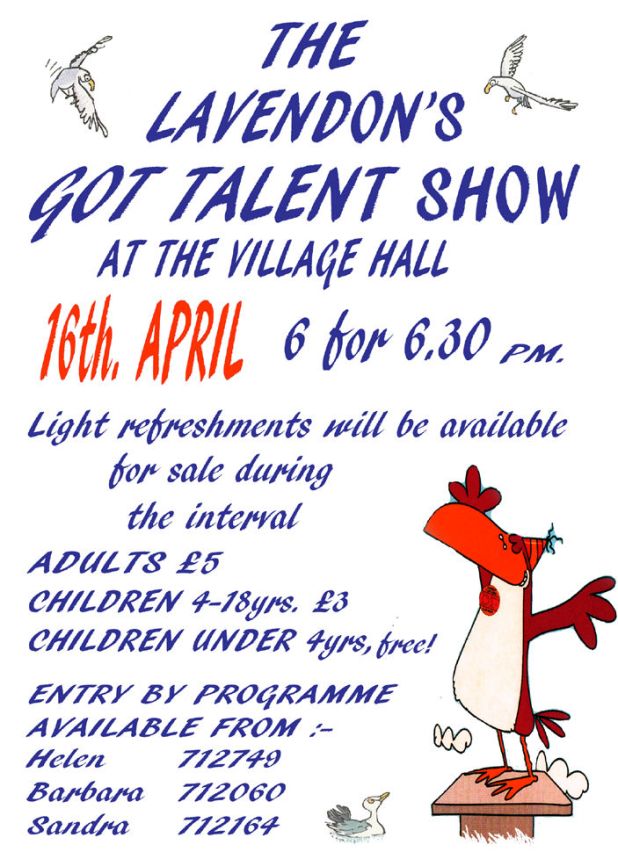 SCOTTISH COUNTRY DANCING MADE SIMPLE WITH NO DRESSING UP!

The Bedford Scottish Dance Group is organising a Scottish Ceilidh Club to give an opportunity for those who haven’t experienced Scottish dancing to learn some of the more popular dances. The first meeting of the Club will be on Friday 15th April and we plan to have eight weekly meetings in the first instance, the last meeting being on the 3rd June. We will then meet again in the Autumn if there is sufficient interest. Each evening’s dancing will begin at 7.45 pm and finish at 9.45 pm. The cost for each evening will be £3. We have booked the Reading Room, 1, Barkers Lane, Bedford MK41 9SH for the eight week period. This is at the Goldington Road end of Barker’s Lane on the west side of the road. There is limited off-road parking but kerb-side parking in Barker’s Lane and King Edward Road is more than adequate.

You do not need a partner. You may find soft shoes [trainers/plimsolls] most comfortable. John Mullett will be the instructor for each evening’s dancing. He does Scottish Country Dancing and Highland Dancing. You may have met him at our New Year Ceilidhs. The plan he has for the group is to take 7 weeks to prepare for a party. The party will be the final session and you will be free to invite your friends to join us. However, before then, he plans to teach you the dances so that you can dance with confidence and to the best of your ability at the party.

I need a rough idea of how many people are likely to attend our first meeting so please let me know if you would like to come along. 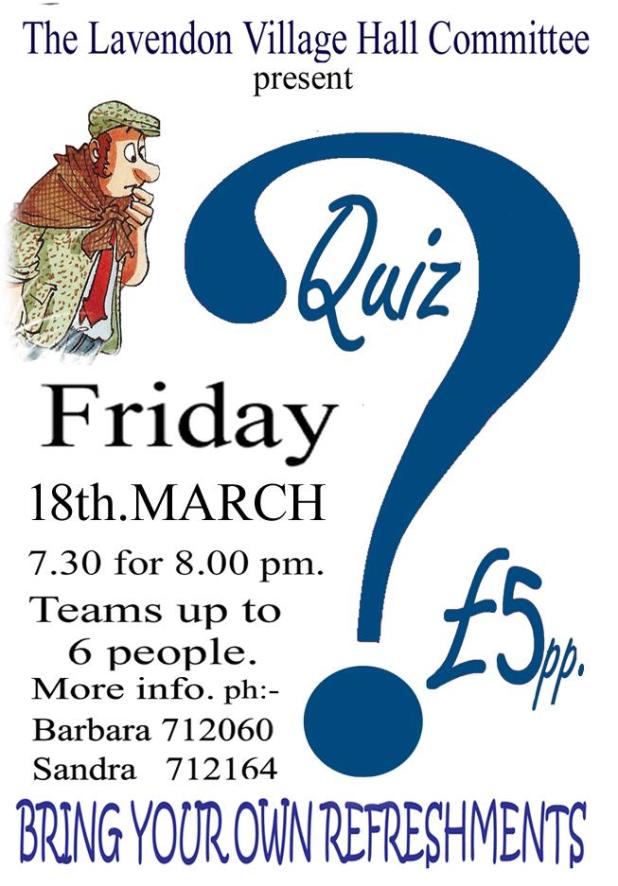 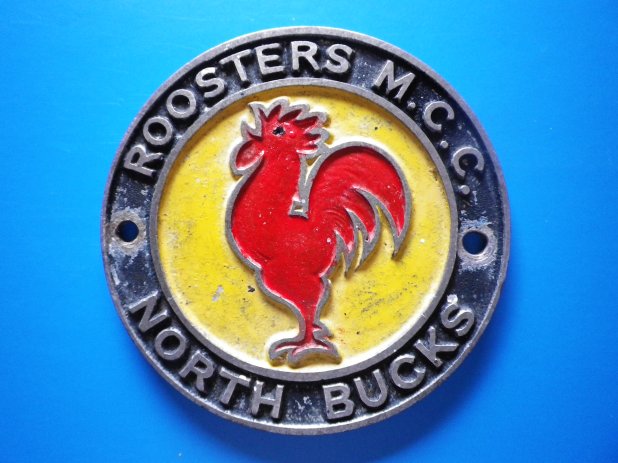 Badge of the Roosters Motorcycle Club of North Bucks

The badge shown above is that of the Roosters North Bucks Motor Cycle Club which operated in North Bucks during the late 1940s and on into the 1950/60s. The badge, 3½ins diam, is photographed by kind permission of Lavendon resident Sylvia Freeman whose late husband was a member of the Roosters MC Club.

The Roosters MC Club was founded by local motor cycle enthusiasts Bill ‘Yipee’ Barwick, George Coley and others whilst drinking in the former Cock Inn in Olney one evening shortly after the War. Initial interest was generated as a result of them putting an advert in the local paper suggesting fellow motor cycle enthusiasts should turn up for an inaugural meeting. The Chairman of the latter meeting was Ian Jolley, already Chairman of the then well known South Bucks Motor Cycle Club. Ian Jolley lived for a spell at Northey Cottage, Northey Farm, Lavendon. When Ian left to live elsewhere, Bill Barwick and his wife, Frances, took over living in the cottage. 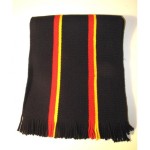 The Roosters Club expanded rapidly with interest shown from all over North Bucks and also Northamptonshire. Club nights were well attended and in due course motor cycle and scrambling trials were held at various venues in the district, including at Petsoe End near Emberton. The Club also became affiliated to the Auto Cycle Union. At the inaugural meeting George Coley determined that the Club colours should be Red, Yellow and Black; this was because they were the colours of the REME [Royal Electrical and Mechanical Engineers] “and George had the scarf with him.” These colours are reflected in the badge as shown; it should be born in mind that many of those who joined the Club did so following a recent return from WW2 service life. 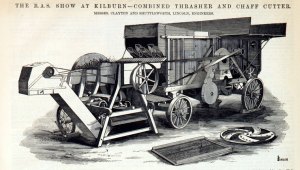 A Clayton and Shuttleworth Threshing Machine – Picture courtesy of www.itsaboutlincoln.co.uk

THRASHING EXTRAORDINARY.—A steam thrashing machine, of Clayton and Shuttleworth’s manufacture, the property of Mr Wm. Sharman, of Lavendon, thrashed out lately, at the Turvey Hall farm, sixty quarters* of wheat in six hours and a quarter.

NORTHAMPTON PETTY SESSIONS. Tricks of the Craft.— Samuel Shelton, of Lavendon, was charged with having substituted inferior leather for soling in some army boots which he was making for Messrs. Parker, of this town. He is in the Bucks Yeomanry, and conceiving charity to begin at home, he worked up Messrs. Parker’s superior material some military boots for his special wear, and put his own stuff into the goods of his employers. He was fined £2 8s. and 7s. expenses.

NEWPORT PAGNELL – RURAL DISTRICT COUNCIL
A letter was read from the Rev. G. P. Soames, rector of Lavendon, suggesting the formation of a local committee to deal with the sanitation of that parish. The report was adopted, and Mr. Longland gave notice that he should move at the next meeting that a Parochial Sanitary Committee be formed for the parish of Lavendon.
[And the following week]:
Mr. T. Longland moved, and it was carried, that a Parochial Sanitary Committee, consisting of the Rural District Councillors for the parishes Lavendon and Warrington and the Lavendon Parish Council be formed for the parish of Lavendon, the expenditure of such committee not to exceed £50 in respect of any one contract. —lt was resolved to refer the Inspector of Nuisances report on the sanitary condition of Lavendon to the Parochial Committee, and that officer was instructed to summon the first meeting.

NEWPORT PAGNELL PETTY SESSIONS.
Benjamin Hardy, foreman shunter, 119, Cambridge-street, Rugby, was summoned for not giving audible warning of approach with a motor cycle at Lavendon on March 14th.—Defendant, who pleaded guilty, was stated to have rounded a dangerous corner in the village without sounding his horn. —Supt. Callaway stated that this was the first case at that Court under the particular section of the Act.—Defendant was fined 7s. 6d. 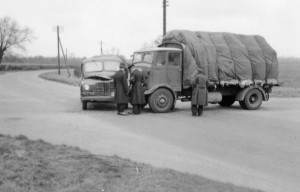 The annual Parish Meeting was held in the Schools on Monday, Mr. J. M. Cony presiding. After some discussion slight increases were made in the general and lighting rate. A considerable amount discussion arose on the question of “Should the Parish Council take steps to provide a playing field?”, and it was agreed that the Council should explore the possibilities of this. The proposed by-pass was next discussed and a resolution to ask the County Council to consider taking it farther from the village or to repair the existing road was carried unanimously.

[Subsequently] A meeting of the Playing Fields Committee was held in the schools Monday, Mr. J. M. Cony presiding. Correspondence was read from Mr. Langley Taylor, F.R.I.B.A., Hon. Secretary of the Buckinghamshire branch of the National Playing Fields Association, the question of providing a recreation field. After considerable discussion it was resolved to inquire of various landowners the possibility of purchasing about four acres of land. It was also resolved to inquire of the Playing Fields Association and other bodies as to the amount of assistance the Committee would get from them in purchasing the ground.

LAVENDON – Following correspondence with the Ministry Health regarding the desirability for additional Council cottages to be built in the village, the British Legion (Lavendon branch) has been informed by the Ministry that the Newport Pagnell Rural Council has been invited to apply for the Minister’s authorization to obtain tenders for the erection of further houses.

RECORD ATTENDANCE – There was a record attendance at a whist drive arranged by the Forces “Welcome Home” Fund Committee, held at the Ambulance Hall on 1st March. Prizes were a goose, given by Mrs. Hartigan, and won by Mrs. Wadsworth, of Turvey; two cockerels, given by Mr. D. Clarke and won by Mr. J. K. Green and Mrs. Clarke; two score eggs, given by Messrs. Cony and Stowe, and won by Miss D. Franklin, of Carlton, and Pte. P. Walkden; and two rabbits, given by Mr. Sanders, and won by Mesdames Leeper and Goddard, of Newton Blossomville. Profits amounted approximately £10.

PARISH COUNCIL – [Following the Parish AGM and elections] The old Parish Council met for the last time at the Infants’ Schoolroom on Monday. The Clerk reported that he had raised the matter of the erection of a post-box and a telephone kiosk for the Council Houses area in Olney Road with the Post Office authorities. Among other points discussed were housing, marking of public footpaths, lighting, and the dilapidated condition of the Cemetery wall.

BRITISH LEGION MEETING – Over forty members of the British Legion were present at a meeting of the Lavendon branch last week. Correspondence was submitted regarding the branch’s resolution requesting the erection of additional houses, and satisfaction was expressed concerning the attention the matter had received both by the Ministry of Health and the Newport Pagnell Rural District Council. The Branch Secretary, Mr. R. G. Panter, reported that almost every ex-Serviceman in Lavendon (all wars) had paid a subscription for the current year. Mr. S. C. Holmes (Chairman) presided, supported by Mr. F. Odell (Vice-Chairman) and Mr. R G. Panter (Hon. Secretary). Mr C. G. Creed (Treasurer) was absent owing to illness.