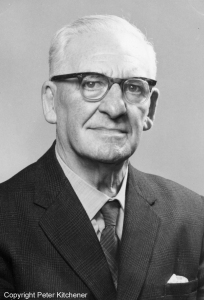 The Lavendon Connection Web Site is fortunate to have copies of a number of photographs that were taken in Lavendon, typically in the 1930s, by Maurice Kitchener, a photographer working from Newport Pagnell. The relevant photographs are individually identified in the various vintage picture galleries elsewhere on this site.

One of Maurice’s Grandchildren, Peter Kitchener, has very kindly supplied additional information about his Grandfather. Interestingly, Peter used to live in the village of Lavendon together with his sister and parents, Basil and Gladys Kitchener. Until about 1960, their home was at the bungalow known as Sarafand in Castle Road, named after Gladys’ birth place (in what was then Palestine).

Between 1925 and 1936 (when Milton Keynes was still a village) he cycled around North Bucks photographing local villages and towns. He produced picture postcards which he then sold to the local post office or stores. Milton Keynes City Discovery Centre is storing approximately 1750 of his original glass plate negatives and has printed and digitised approximately 1300 of them.

I know little of Maurice’s early life. Before the First World War he was employed as a “clicker” in the shoe trade. He was already taking photographs of Olney meadows and family members at the age of 17. He played wing forward for Olney Rugby Club before enlisting with the Royal Flying Corps as a radio operator in 1915.

After the war Maurice returned to his native Olney and was employed as a “clicker” again. However, by 1921 he was already working as a photographer in Chesham. He finally settled at 22 St John’s Street, Newport Pagnell in 1931 where he had his own photographic studio. He remained there for the rest of his life.

Peter Kitchener wrote a series of articles about Maurice that appeared in the Olney Phonebox magazine, in eight parts, May – December 2012. These can be seen in the Phonebox Archive by clicking here.

More information and a collection of local MK photographs have also been made available recently in the Kitchener Collection – see http://www.mkcdc.org.uk/kitchener/about/maurice-kitchener/