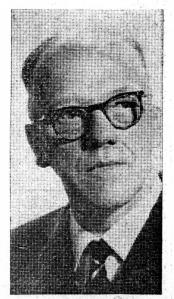 In June 1983 the late Claude Horwood wrote an account of local Lavendon people and activities, set out under the title “Lavendon Past and Present – The Inside Story”.

In this extract from these memories, Claude Horwood describes the public service contribution to Lavendon village life that was made by the Reverand George Pochin Soames who was the Rector of St Michael’s Church, Lavendon, for some 42 years between 1875 and 1918.

Claude Horwood was, like the Rev Soames, a County Councillor and also a Rural District Councillor covering the Olney Ward which included Lavendon Parish.

In 1875, the Rev George Pochin Soames became Rector of Lavendon. Within a very short space of time, the Rector, with his chestnut cob and trap, became known over a very wide area. When County Councils were formed in 1889, Mr Soames became the representative for the Olney and Lavendon Ward. He also became the first Chairman of the Parish Council. It speaks something of the esteem in which he was held that he was the County Councillor for thirty years but was never opposed again after the first election. The success in 1889 was the occasion of great excitement. The Rector’s wife did not quite share the husband’s “hail fellow well met” attitude. She was Mrs Frances May Soames. It is thought that she looked a little askance when, after one general election (Mr Soames having been at the Count) several of the ladies of the village hugged and kissed him on his arrival with the news.

Throughout the Midlands, Mr Soames became known on Liberal and temperance platforms. He was a tremendous worker in the cause of Mr (later Sir) Harry Verney. One resident recalled an occasion when the Rector curbed a rowdy election meeting by simply walking to the edge of the platform, holding up his hand, and saying “Quiet”.

In those days, villages had their crier, who used to announce with his bell and voice such things as political meetings, the travelling pot-mender, and other events. The crier at Lavendon was Mr William Hives, who, for some reason, was always spoken of as Warwick Hives.

The Conservatives worried greatly about Lavendon, and not without reason. It must have been the most Radical village for miles around. Mr Soames always went to Conservative meetings, refusing to sit down, and walking around the room with his hands behind him. At one meeting, Conservative candidate Beaumont said with some asperity, “I wish the Reverend gentleman would keep his flock quiet!” On this occasion, the Rector’s efforts to restore order failed, and the audience started shouting “Quack! Quack!” in mockery of his “Quiet! Quiet!” This was a very rare instance of the Rector’s failure to secure results.

On another occasion, the Conservative meeting was rudely interrupted by Joseph Huckle, of Olney, who was a roadsweeper in summer, and a chimney sweep in winter. Mr Beaumont was just reaching the climax of his speech when Mr Huckle’s head suddenly appeared round the edge of the door. He shouted, “Man, ye are a liar, and the truth is not in thee.” The audience found the interruption more entertaining than the speech.

Mr Soames’ forty-two years as a Rector were marred by several sad events. A baby was dead at birth. A son, Francis Oswold, age 27, was drowned in an accident, and is buried in the churchyard. Another son became a solicitor, went to the Australian bush, and was never heard of again. In 1914, Mrs Soames died, and Miss Mildred [the Rev Soames’ daughter born September 1871] became the lady of the Rectory, and remained so until Mr Soames’ death at the age of 80, in 1918. During the Boer War, Cpl Harry Holmes, (who later became RSM Holmes) wrote home, just after the Battle of Belmont, and says in his letter, “Thank Miss Soames for the socks she made, which fit me beautifully, and Mrs Soames for the gift of handkerchiefs.”

Mr Soames sometimes paid for a joint of meat to be sent to a poor family, but he was unfortunate with his investments. This was the hey-day of several infamous swindlers, including the South Sea Bubble, and it is thought that Mr Soames lost all his savings.

Mr Soames always took an interest in the babies he baptised. It gave him a great thrill when a bouncing boy, Benny Holmes, was born on his own birthday. The last wedding conducted by Mr Soames was that of Mr and Mrs Jamieson on Boxing Day 1917.

Mrs Soames is best remembered as the strict choir mistress, and she had a splendid ear for music. The Rector too was a wonderful musician, and sometimes he attended choir practice. Sometimes he would say to his wife, “Fanny dear. That was wrong.” The stern reply would be, “It was not, George!” Finally, the Rector would gain his point.

Night school was one of the Rector’s innovations. During the winter months, he gave lessons in reading, writing, and arithmetic to boys and girls who had left school, charging a penny a week. The pennies were spent at the end of the winter on a party at the Rectory. The fare was liberal, so the pennies must have been supplemented from the Rector’s pocket.

In 1907, a young soldier home on leave from France in the First World War remarked to his mother, “I shall not see Mr Soames again.” This proved to be true, and on March 29th, 1918, Mr Soames died at the age of 80, and was buried in the churchyard. He was “one of the old school”, a fearless fighter on the Liberal platform, and at temperance meetings. During his term as Vice-Chairman of the County Education Committee, no fewer than seven Secondary Schools were opened in the County.

Here, there follows a mystery. The grave has an unoccupied space. This was intended for Miss Mildred. She went away to the Oxford area, and although she must have been dead for a considerable time, Lavendon residents do not know when or where. At one time, Miss Soames held the advowson. No one will quarrel with the inscription on Mr Soames tomb, “Good and Faithful Servant.”