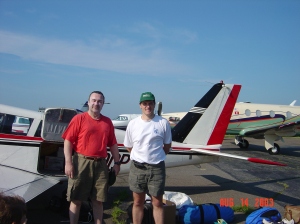 Robert Chambers (right) with friend, Ray, about to take off for the UK.

We are fortunate in having a stunning set of aerial views taken over Lavendon in 2003 by a former resident of the village, Robert Chambers, who now lives in the United States.

Robert’s Flight from Connecticut to Lavendon

In 2003, Robert set off from his home in Connecticut with his friend, Ray, to fly to the UK and, in particular, to see his home village of Lavendon from the air. From Connecticut, Robert and Ray flew up to Maine (the Easternmost state) where they fuelled up, and then flew onwards to Goose Bay on the Labrador coast in Canada. They spent the night there and took off early the next morning, flying first to Greenland, where they again refuelled and took off to fly over the ice cap and onwards to Reykjavik, landing there around 11:30pm at night. Robert and Ray spent a couple of nights in Iceland due to the weather conditions, then left there and flew to Wick in Scotland to spend the night there. The next day they arrived at the nearby Cranfield airfield which they used as a home base for their local explorations and to gather the fascinating aerial views of Lavendon, shown below.

Click on a photo to enlarge the view and see the location caption in full:

Olney Road heading away bottom right, with Longmire and the Horseshoe top centre. 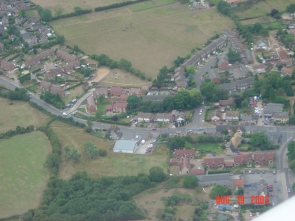 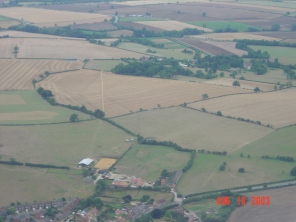 The view from the village centre towards the Grange and Abbey Farm hidden amongst the trees, near centre, with Northampton Road bottom right and New Row bottom centre.

A general view of Lavendon with Olney Road top left and the New Glebe bottom centre. 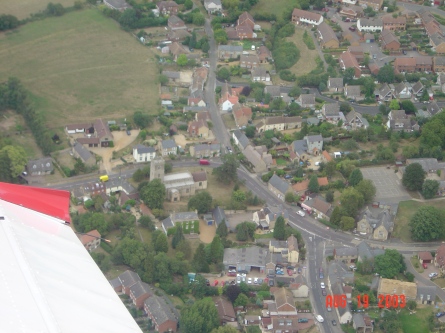 The centre of the village with Castle Road top centre and Olney Road at the bottom.