Many in the Benefice were delighted when in 2011 the Revd Christa Pumfrey of Lavendon was appointed an Honorary Canon of Christ Church, Oxford.

Interestingly, another worthy member of Lavendon parish, Dr Richard Newton, was also installed as a Canon of Christ Church on 5th January 1752-53. Dr Newton lived at the Grange in Lavendon which was built in 1626 by Robert Eccleston re-using stones from the former Lavendon Abbey. A fine sundial above an earlier principal entrance records this date.

Dr Newton matriculated at Christ Church in 1694. There he continued his studies and became a Tutor “where he executed the office very much to his own and the college’s honour and benefit”. One of his students was Henry Pelham who later became Prime Minister and it is said that more than once he employed Newton to write the King’s speeches. Newton gained his Doctorate in 1710, the year in which he was also appointed Principal of Hart Hall, originally founded in 1282. Here he built part of a new quadrangle, including a chapel and 15 student rooms. He endowed the new institution with an annuity from his estate at Lavendon.

It seems that Dr Newton sought tirelessly to establish Hart Hall as a college such ‘that poor students could be trained in it for the ministry on very moderate terms of payment’. After much labouring on his part, a charter for a new college was granted in 1740 and Dr Newton thereby became the first Principal of Hertford College, Oxford. By 1805 the College floundered and was taken over by Magdalen Hall, though it was re-created Hertford College in 1874.

The National Biography records that Dr Newton spent much of his spare time at Lavendon Grange which his father, Thomas Newton, had purchased around 1677. Dr Newton often took the undergraduates of his college to stay with him at the Grange and there he also received many other worthy visitors. Dr Newton died at Lavendon Grange on 21 April 1753 in his 78th year. A later account written in 1783 described him as being “very thoughtful, sensible, judicious, and a truly honest man”. Furthermore “his writings shew his learning, judgement and integrity; and his life exemplified every Christian virtue”. When he died it is said that he was “extremely lamented by all the poor of that neighbourhood, and by all his friends and acquaintance throughout the kingdom”.

Dr Newton had one child – a daughter, Jane – who married the Rev Knightley Adams. According to the Rev Rendell’s Village History (he was Rector of Lavendon, 1945-50), Newton’s grandson, the Rev Simon Adams, later became Lord of Lavendon Grange Manor and was at one time Curate-in-Charge at Lavendon. Evidently daughter Jane was also highly appreciative of her father, for she erected a monument with a detailed tribute to her father’s achievements: here she recorded that he had “a Heart warmed with extensive Benevolence, and softened by unaffected Politeness”.

Dr Newton’s memorial erected “in filial piety” by daughter Jane is to be found on the wall of the North Aisle of Lavendon Church. Other family memorials can be found in the Church, including one to Dr Newton’s eldest brother James, a Barrister of the Inner Temple who died in his 25th year in 1690, and also two memorials to his mother, Katherine. 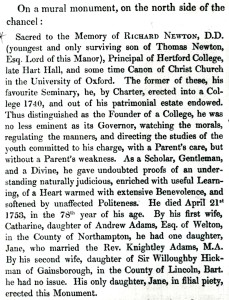 Transcript of the monument to Dr Richard Newton.