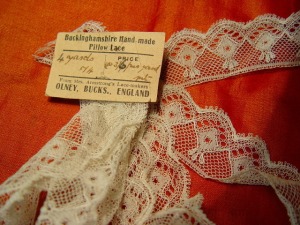 Many readers will be aware that lace making was an important cottage industry in the 19th century, especially in ‘our’ part of North Buckinghamshire and the adjoining counties. In 1851 for example, the census records tell us that more than a third (36%) of those shown as living and working in Cold Brayfield parish were engaged in lace-making. In both Newton Blossomville and Clifton Reynes the figure rises to over 40%, and in Lavendon 46% of the working population were engaged in lace-making. In most cases, though not exclusively, the nimble-fingered wives and daughters were the lace-makers, with a similar number of husbands and sons typically engaged in working on the land, mostly as Agricultural Labourers.

Lace-makers worked long hours for a relative pittance. Over the years they invariably suffered failing eyesight due to lengthy periods spent working over their lace pillows by candlelight, especially across the long dull winter months. If they took any time out then of course it resulted in a corresponding loss of their already meagre income. Nevertheless, two local holidays that lace-makers were keen to celebrate occurred on 25th and 30th November each year, St Catherine’s and St Andrew’s Day respectively, also known to lace-makers as Catterns and Tanders.

There were local and regional variations as to which of the two days was considered the most significant festival day. St Catherine was the patron saint of spinners, lace- and rope-makers. The Catherine Wheel with which the Saint is associated is of course reminiscent of lace and spinning work. Elsewhere in Buckinghamshire Catterns was also known as ‘Candle Day’ when lace-makers commenced using candles for the winter season.

Naturally enough any holiday was worthy of celebration with singing, dancing, games, food and drink. In his account ‘The Romance of the Lace Pillow’ published at Olney in 1919, the local historian Thomas Wright tells us that in some local villages tea was taken together with Cattern Cakes, followed in turn by music-making and eating apple pie. In Olney, frumenty or ‘thrumety’ ( wheat boiled in milk, perhaps with plums, nutmeg, cinnamon and sugar added) was taken on Tanders, together with a honey drink, similar to mead. Thomas Wright also tells us that in the evening the old folks were sent off to bed whilst the young folks indulged in bob apple and other ‘riotous games’. In Turvey figs were eaten, donated by Mr Charles Higgins whose birthday was on Tanders. (Surprisingly, we are also told that “tons” of figs were sold in and around Olney on Palm Sunday, also known as Fig Sunday).

Some of the traditional celebratory recipes adopted for Catterns or Tanders included caraway seeds. The latter were a reminder from Farmers, some of whom provided cakes for their workers, that the time for sewing all autumn seed such as wheat and oats was now past. The following is a recipe for Cattern Cakes which might be described as a form of soft cookie. They are seriously tasty and it is well worth giving them a try to celebrate St Catherine’s Day, just as our village ancestors did in the past!

Stir the flour and cinnamon in a bowl, then stir in currants, almonds, caraway seeds and the sugar.
Add the melted butter and the beaten egg. Mix well to form a soft dough.
Roll out on to a floured board, into a 12 x 10 inch rectangle.
Brush the dough with water and sprinkle with the sugar/cinnamon mix.
Roll up and cut into 3/4″ slices (if preferred the dough can also be formed into small balls and pressed flat, the taste is the same!)
Bake at 200°C (180°C fan oven) or Gas 6 for about 10-12 minutes until browned.